I will be presenting the faces of abused women as painted on moving boxes. The artist, E. Micol, has artfully captured the doleful eyes of these women.  The boxes represent all that remains of their shattered lives after leaving their abusive situations. I find the souls within the eyes of these women to be transformative.   Alice Parris 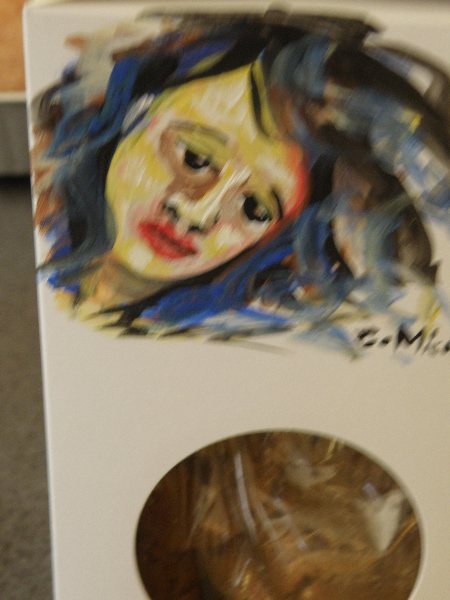 The Eyes Of The Abused Collection by Artist E. Micol

The Eyes Of The Abused Collection by Artist E. Micol

The Eyes Of The Abused Collection by E. Micol

Abuse is a generational curse.. The abused becomes the abuser. The abused seeks out the very same type of abuser and the cycle is repeated again and again. My mother was abused by her mother, andsurvived  a miserable marriage. When we were young she was distant, unavailable, sleeping (most likely depressed) In her later years she became the rock that all of her children could count on in times of trouble. Myself, I have been raped, pimp-beaten, and verbally abused during my earlier years. I always seemed to choose the same type of man, although on the outside they seemed to be very different. In the end, their chief objective was to control me and that by any means necessary. If I could be controlled by a beat-down, that is what I received. If I could be controlled by systematic verbal abuse, that is what I received. Now, I have found that I am a whole lot meaner than I used to be. I can be verbally and physically abusive myself, given the right set of circumstances.

I am writing this blog because my twenty-five year old daughter has been choosing the same bad man since she was eighteen. Her life has been a series of miseries. I was unable to help. She was looking for her father who died when she was only  seven. I call him the “party-pimp” He was good-looking, charasmatic, charming, unfaithful and a pimp-style beater. I spent a Christmas eve in an emergency room after having been beaten for an hour. The last of many beatings.

Anger is depression turned outwards.  Depression is anger turned inwards. My daughter has tried both approaches.  She has tried to assault her abuser, she has been curled into a ball with heart-wrenching sobs. No matter how much I wanted her to not live my life, she continued to choose the same type of man. Today I got a phone call. I was waiting for it. I knew it was coming. She had tried to get a noose and kill herself because of abuse, she had considered drinking chemicals. Tonight, she got a knife, after she had punched her abuser in the face, and there was no telling whether or not she would try to kill herself, him or both. She was a loose wire, having been verbally beaten down for years.  Because of the amount of prayer that I have spent on her behalf, she escaped her jailor. He, an ex-felon, an alcoholic, an all around loser told her how she was a panty-waste. The cruelty was unbearable. She is now staying with her brother and his family. My family is galvanized to help in whatever way we can. We are eager for her to have her own worthwhile life.

She is eligible for her father’s survivors benefits. She is unable to work, having developed a disorder where she faints from stress, or either has developed a seizure disorder. She has been referred to a neurologist. The problem is that my daughter has been diagnosed with ADD, learning disability, and more recently bipolar (as are all of my relatives with a few exceptions) She is unable to fill out the forms because she can read them and simply not understand what she has read. My beloved daughter-in-law will help her get help. There has to be someone in the Social Security department who assists people who have a problem with comprehension. Hell, there are people who are are still totally illiterate.

I am angry, yet grateful. I am grateful that my daughter is not mortally wounded,  incarcerated or dead. She has knife wounds on her fingers. I have a great deal to say about God’s faithfulnes. This is not the time for my sermom. Right now, I can ony describe what was my mother’s life, my life and my daughter’s life. We live in a society where pregnant women are being  murdered by the  person who has vowed before God and man to love them, where college students are disappearing faster than UFO’s on radar, and where men have begun to attack females in the most bizarre ways. Are we living in a “woman-hating” society? It sure feels like it. What country have we now become?

I have written poem entitled, THE WOMAN OF A THOUSAND CUTS. It is my story. I hope that this poem will help many abused woman make a decision to survive. To get out before it is too late. To read the handwriting on the wall. To understand the abusive personality, and to make a plan B once it has been identified. Men have become lovers of themselves. Women, keep your eyes open. It has been a long time since we have been on anyone’s pedestal. We have become prey.  Women beware!

THE WOMAN OF A THOUSAND CUTS

She barely noticed, as she skipped

along as a child, the bushes of ill-will.

She, being envied, never understood…

As she passed by these bloodied-bushes,

thorns scraped her legs and a thorn

pierced her left foot. She kept on skipping,

stopping long enough to pull out

When she became a woman, she never

After the rapes, she noticed a gash in

of a pointed gun, the betrayal of love,

left black & blue marks in places no one

was designed to see; within her heart.

Loving again, she found mockery to be

her daily bread. These assaults became

lacerations of the mind, not the will.

When others carried away her children,

she moaned deeply, gutturally; a wounded

animal. There was massive internal bleeding.

She kept moving. Die to self is the only truth.

she met deception and darkness.

She kept moving, though her pace slowed

with age. She has flash-backs

of a thousand cuts, looks above, seeks

comfort from life’s only love.